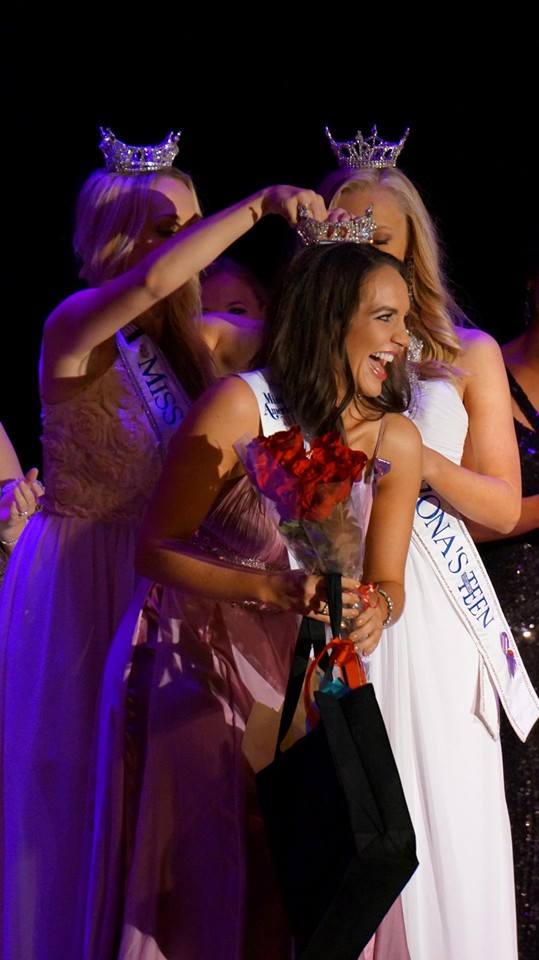 Hey. I did a pageant. Whoa. Wait…I won a pageant.

Wait…Christina Tetreault? Random. I didn’t know she did pageants.

Don’t worry. I didn’t know that I did either.

For those of my friends and family that I see on a regular basis, they know what a whirlwind my last two years of life have been. From college graduation to physical therapy to a new shining and sparkling hat…it’s safe to say that life’s been crazy. And I wouldn’t have change my current craze for anything.

Since last November I have had the honor to serve as Miss Maricopa County. As a local titleholder of the Miss America Organization, I also just to competed a nine-month long preparation and training for the job and title of Miss Arizona [the winner of Miss Arizona competes for Miss America this September].

Upon graduating Arizona State in May of 2013, pageantry was most certainly not on my to-do list. Actually, just about everything else in the entire world was on my to-do list at that time, until my car decided to take me on a little adventure down the 51-freeway at the tail end of my college career. That car-totaling adventure and accident unfortunately set off my future plans [I laugh at that statement because really...I tried to plan life...when does that ever work out? God's laughing *very loudly* too].

While having to make career path changes and learning to actually slow down and take care of myself as normal young adult should do, I somehow found a deep passion of mine – The Miss America Organization. The four points of the crown: service, style, success, and scholarship. The organization who’s catered high education to young women since 1921. This is the same organization that has produced thousands of young success women who work entirely service based on personal platforms.

While going through physical therapy and moving back home, my city suffered three deaths by suicide from my high school alma mater within three months. The entire city was shaken. My fellow Chandler High School alumnus community was contacting each other out of the blue after years of not speaking with each other asking “Are you okay?” “Did you hear about so and so?” Social media was blasted with the messages that no person ever wants to read – the ones that begin with “It brings tears to my eyes to see” – the ones that continue with “Rest in paradise” – and the ones that express “I don’t understand how or why.”

This hit home for me because my best friend had attempted suicide just two years prior (praise God she wasn’t successful) and I had finally felt as though I had just come to grips with understanding that. I knew, whatever my future undecided and undetermined plans were, that I had to advocate for suicide awareness and prevention in whatever manner I could.

Because I’ve always been prone uncanny word-vomit, too much caffeine, and a terribly type-A personality, I truly have always felt as though I have been called to advocate for change in the community. It may sound a bit crazy, by my thoughts always lead me to ultimately think- if no one’s going to talk about this, I need to.

So, after many inquiring emails sent to the Miss Arizona state staff, many phone calls filled with petty and silly technical questions, and many hours of thought and prayer, I decided to sign up for a local preliminary to the Miss America Organization. A few months later came November when a panel of judges trusted me enough to hold a title and chose me as Miss Maricopa County.

Over the past 9-months I have been

The Issue:
Suicide is a global issue. A global issue that’s hit my heart way too hyper-locally. I cannot stand to see lives continue to be lost. It’s just not okay.

-There is one death by suicide in the world every 40 seconds. (WHO)

-Suicide is the 3rd leading cause of death in the world for those aged 15-44 years. (WHO)

-Suicide is the 10th leading cause of death in the US for all ages. (CDC)

-Suicide takes the lives of over 38,000 Americans every year. (CDC)

-There is one death by suicide in the US every 13 minutes. (CDC)

-Suicide is the 2nd leading cause of death for 15 to 24 year old Americans. (CDC)

Considering the fact that I am a 20-something-year-old female who fits a large majority of the demographics and statistics above absolutely terrifies me. When reading these numbers all that goes through my mind is “this is the second leading cause of my friends around me?!” The second. THE SECOND. The loved ones around me are losing their lives and there’s a lot of that we as a society can do about it.

Unfortunately throughout this journey as Miss Maricopa County the past 9-months, I lost my grandmother to death by suicide. I know that now her heart is at rest and my family and I are on a journey to healing and understanding. It’s also fueled the fire in my belly to continue